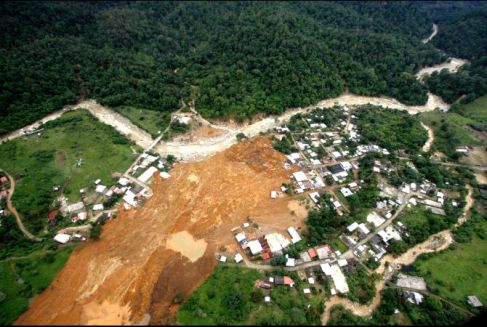 The death toll has reached over 100 in Mexico following tropical storms Manuel and Ingrid that hit both coasts, excluding the 68 missing following the landslide in La Pintada on Monday, whom President Enrique Pena Nieto said had”little hope” of being found alive.  On Thursday, five police officers died on a rescue mission to La Pintada  after their helicopter crashed.  Water levels have risen to the waist in parts of Sinaloa, a state hit hard by Manuel and host to at least three deaths.  In total, 24 of Mexico’s 31 states were hit by both storms.

The string of tragedy has taken a political edge amidst accusations that the Mexican government, despite Pena Nieto’s involvement with the aftermath of the La Pintada landslide, handled the situation poorly.  Amount the accusations is  a statement by the Governor of the state of Guerrero, Angel Aguirre Rivero, that corrupted officials have authorized building permits in areas that are unsafe.

Only time will tell whether Pena Nieto’s claims – “I will come to inaugurate a new La Pintada. That’s a promise I’m making today to this community, which has undergone such a misfortune,” – along with those of officials in Acapulco and neighboring areas, will forge a new disaster prevention strategy and safer construction codes.

For more information, read more on the BBC and the NYT.